Still chasing the end of the rainbow 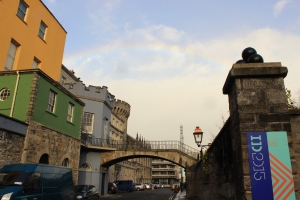 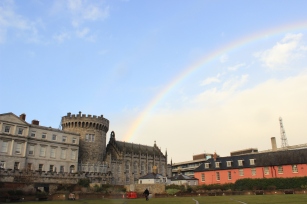 My Dad and I used to play a really fun game when I was growing up called, chasing the end of the rainbow. What kid, or even adult does not want to see for themselves what is at the end of a rainbow? I know I always did, and still do. Anytime my Dad and I (or most likely me) would catch a glimpse of a rainbow we would take off (weather permitted) either in the car or walking on a journey to try and find the end of the rainbow. On our journeys we would often speculate about what could be at the end of the rainbow; gold, treasures and such, maybe even a leprechaun or two as legends have stated? But despite how fast I asked him to drive, or how fast we power walked, as close as it always seemed we could never quite reach the end. After some amount of time had passed, and either the Rainbow had disappeared, or it seemed too far away, we would turn around and make our way back towards home. Neither one of us would necessarily be upset, because we had just spent quality daddy daughter time together, but it seemed to me at the time anyways that we were even more determined that we would catch the end of it next time.

Now this went on for many years and I still like to think it still does today with the values and ideas my father has instilled in me. If I see a rainbow today (which is extremely often at the moment living in Ireland), I often contemplate which direction I need to head to get to the end of it and if I can make it there in time. Now by this point in my essay you must think I am crazy, why chase colorful light particles that are refracted in water by sunlight? You must be thinking that I am putting my money to a waste going to a prestigious college, and still believing in reaching the end of a rainbow? I know what a rainbow is physically made of, it is more the idea behind them.

Last Saturday I was able to meet my cousin in Dublin, where he is currently working; a Duluth, Minnesota native! As we wandered around the city we talked a lot about school, work, and life in general, with a lot of the focus on Ireland. In the past year and a half we have both spent a substantial amount of time here, him working, and myself studying. It was really interesting to hear his perspectives on Ireland, the job market, and working abroad away from family. As we walked a bit later into the afternoon we had finally stumbled upon the Dublin castle, which we had been looking for quite a while embarrassingly, but we didn’t care to look at a map. When we had finally reached the castle grounds it was unfortunately closing in a few minutes, but that didn’t’ really concern us too much, because the sun was peeking through the clouds and a great big rainbow appeared in front of us. It looked like the rainbow was coming directly out of the castle; it was such a beautiful sight, possibly more impressive than the castle itself.

Seeing that wonder with him, and all that he has done has made me realize that you can reach the end of the rainbow, if you put in the time and effort and work hard enough for it. For something that sounds so foreign and impossible for a small town girl, it may not be impossible at all. It was nice to know that a goal that I have had for so long, working in Ireland, may not actually be impossible, and may become possible sooner than I think.

Although not every day can have a rainbow you must find the best in each day and be thankful, find the worst in each day and learn from it. Sometimes you may be going through a stormy patch, and feel like it is much easier to take a different route, don’t do it. Work on pursuing your dreams and the treasure you wish to seek at the end of the rainbow, you never know what you may find if you keep chasing. Although I may be long past the point of chasing rainbows with my Dad in the car anymore, I haven’t forgotten our time together, and through the years still haven’t given up any hope. If you are curious I am still determined as ever chasing rainbows, this time for myself!