“What do you mean you have never had a crisp sandwich?”, my English “mum and dad” puzzled. We were all sitting in their dining room in Worcester. I looked at them with a curious expression wanting to believe, but not wanting to be tricked. With blonde hair comes a lot of stereotypes of being dumb or gullible, and this only multiples in a place where you are not sure of all the customs, and traditions. I knew my English and dad couldn’t steer me wrong so I took the chance and tried the creation of a crisps “chips” sandwich, and was pleasantly surprised. Although the first few bites were careful, it didn’t take me long to appreciate the simplicity yet deliciousness of a crisp sandwich.

What’s in a crisp sandwich one might ponder? For the simple version you only need three ingredients: bread, butter, and crisps, that’s it! Of course one has their choice of each of the ingredients and I have been told that cheese and onion crisps are the best. One always has the option if brave enough to add to the sandwich with things like ham, cheese, mustard, chutney, and veggies, but a classic crisp sandwich only has three ingredients.

Why a crisp sandwich? What is the fascination with such a thing? Although I have not found the origins of the first crisp sandwich, my English friends claim that it is an UK classic, and something that they have had since they were young. They say that they were extremely popular years ago, especially among the kids, and this must still be the case today with the World’s first crisp sandwich shop opening this year.

‘Simply Crispy’ opened in Belfast this January and according to the Belfast Telegraph sold out their entire stock within two hours. They proudly boast their ability to have 35 different types of crisps on a sandwich with a variety of rolls, as well. According to the article a lot of young people (as would be expected) attended their opening, but there was also number of business professionals as well. Their most popular sandwich was called the ‘Belfast Bap’, and featured Cheese and Onion Tayto brand crisps.

A second crisps shop has just opened in Bristol, proving the crisps sandwich shops idea as a success. As tasty as they are, could a shop like this be successful in the US? Only time may tell I suppose, maybe it could be the next greatest business venture?”, (Dad are you reading this?) 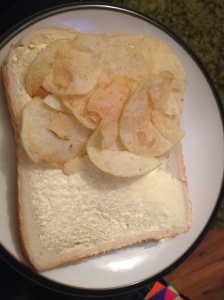